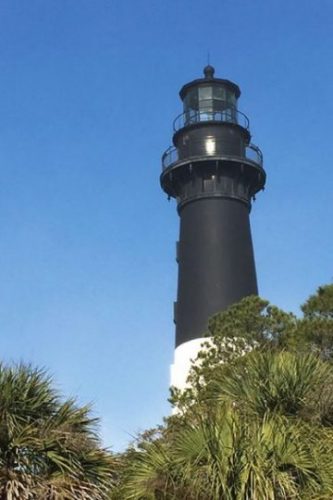 It offers five miles of pristine beaches, an historic lighthouse and a nature center. The Island also boasts a lagoon and ocean inlet, fishing pier and trails through acres of maritime forests. You can even camp right near the ocean!

South Carolina’s most popular state park changed after Hurricane Matthew in October, 2016. The Category 2 storm caused more than $5 million in damages. It completely wiped out the dunes and oceanfront camp sites. It destroyed roads, restrooms and parking lots.

South Carolina’s only publicly-accessible lighthouse was originally built in 1859 and rebuilt in 1875 following its destruction during the Civil War. In 1889, it was dismantled and relocated a mile inland due to severe beach erosion. Later, the lighthouse underwent 18 months of repairs beginning in 2003 to reinforce the 167 black cast iron stairs.

The Nature Center on the south end of the island is also open featuring live reptiles and exhibits highlighting the park’s natural resources with special programs offered several times a week, including an Interpretive Lighthouse Tour on July 13 & 20.

Hunting Island State Park is located 17 miles east of Beaufort on U.S. 21 (2555 Sea Island Parkway). Due to the parking shortage, a shuttle will run from St. Helena Elementary School. Call (843) 838-2011 or visit southcarolinaparks.com for program, parking and re-opening information.