In April 1861, the American Civil War began with the Battle of Fort Sumter in nearby Charleston Harbor. 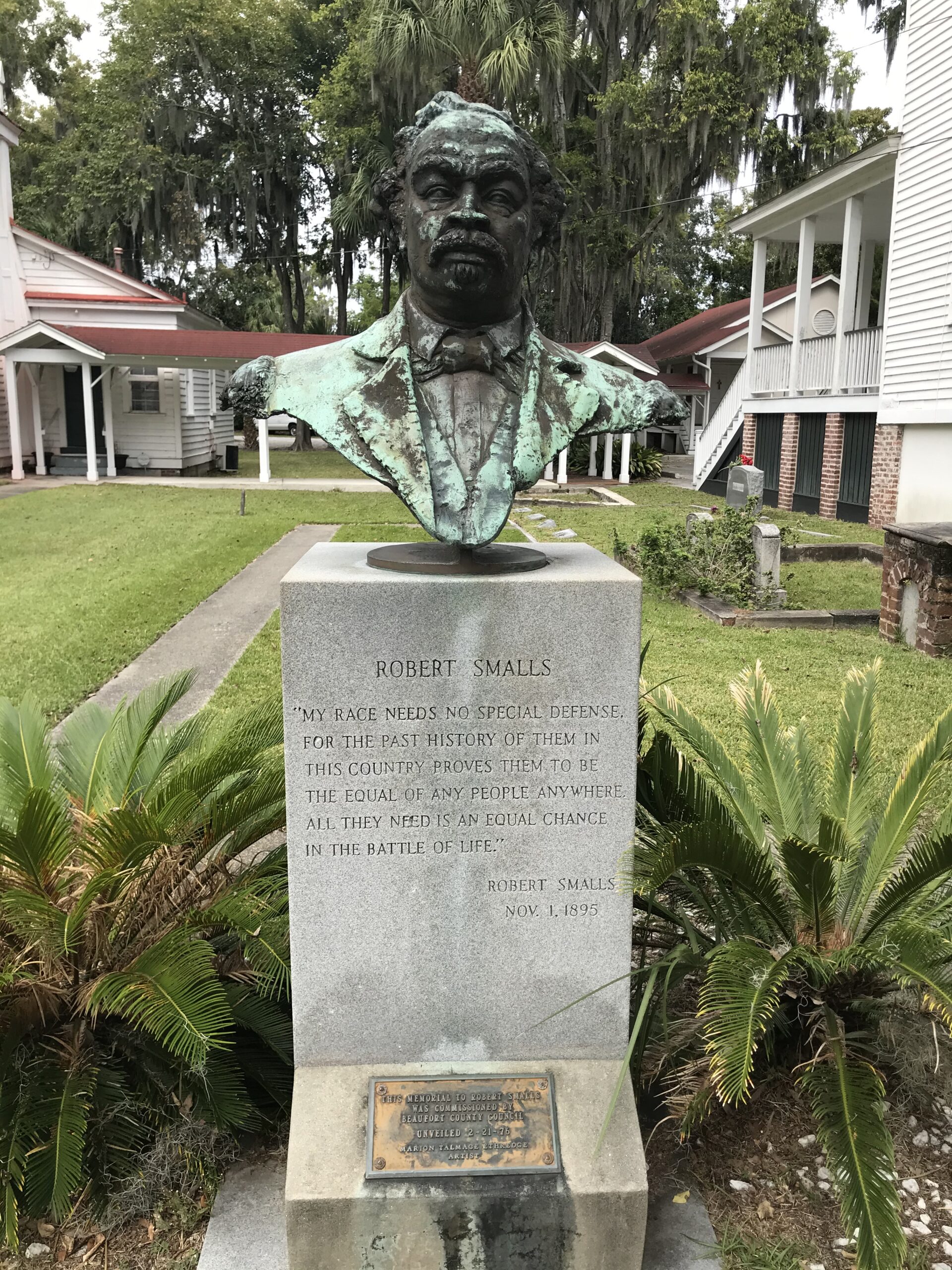 In the fall of 1861, Smalls was assigned to steer the CSS Planter, a lightly armed Confederate military transport under the command of Charleston’s District Commander Brigadier General Roswell S. Ripley.

Planter’s duties were to survey waterways, to lay mines, and to deliver dispatches, troops, and supplies. Smalls piloted the Planter throughout Charleston harbor and beyond, on area rivers and along the South Carolina, Georgia and Florida coasts. From Charleston harbor, Smalls and the Planter’s crew could see the line of federal blockade ships in the outer harbor, seven miles away. Smalls appeared content and had the confidence of the Planter’s crew and owners, and at some time in April 1862, Smalls began to plan an escape. He discussed the matter with all the other enslaved people in the crew except one, whom he did not trust.

On May 12, 1862, the Planter traveled ten miles southwest of Charleston to stop at Coles Island, a Confederate post on the Stono River.

There, the ship picked up four large guns to transport to a fort in Charleston harbor. Back in Charleston, the crew loaded 200 lb. of ammunition and 20 cord of firewood onto the Planter.On the evening of May 12, the Planter was docked as usual at the wharf below General Ripley’s headquarters. It’s three white officers disembarked to spend the night ashore, leaving Smalls and the crew on board, “as was their custom.” (Afterward, the three Confederate officers were court-martialed and two convicted, but the verdicts were later overturned.) Before the officers departed, Smalls asked Captain Relyea if the crews’ families could visit, which was occasionally allowed, and he approved on condition that they depart before curfew. When the families arrived, the men revealed the plan to them.

This was the first the women and children had heard of it, although Smalls recently had told his wife, Hannah. She had known that Smalls longed to escape but hadn’t realized that he was formulating a plan and intended to execute it. She was taken aback but quickly regained her composure and told him,

“It is a risk, dear, but you and I, and our little ones must be free. I will go, for where you die, I will die.  The other women were less steadfast. They cried and screamed when they learned what they had stumbled into, and the men struggled to quiet them. …Later, once the shock had worn off, those women admitted that they were glad for a chance at freedom…”

At some point, three crew members pretended to escort family members back home but circled around and hid aboard another steamer docked at the North Atlantic wharf.

At about 3 a.m. May 13, Smalls and seven of the eight slave crewmen made their previously planned escape to the Union blockade ships. Smalls put on the captain’s uniform and wore a straw hat similar to the captain’s. He sailed the Planter past what was then called Southern Wharf and stopped at another wharf to pick up his wife and children and the families of other crewmen.

Smalls guided the ship past the five Confederate harbor forts without incident, as he gave the correct signals at checkpoints. The Planter had been commanded by a Captain Charles C. J. Relyea and Smalls copied Relyea’s manners and straw hat on deck to fool Confederate onlookers from shore and the forts. The Planter sailed past Fort Sumter at about 4:30 a.m.

As the nearly-free slaves approached Fort Sumter, their apprehension began to grow.

As the Planter approached the fort, several men urged Smalls to give it a wide berth. Smalls refused, saying that such behavior would almost certainly arouse suspicion. He steered the ship along its normal path and in no particular hurry. When Fort Sumter flashed the challenge signal, Smalls again gave the correct hand signs. The fort didn’t immediately respond, and Smalls now expected cannon fire to shred the Planter at any moment. Finally, the fort signaled that all was well, and Smalls sailed his ship out of the harbor.

The alarm was only raised after the ship was beyond gun range. Rather than turn east towards Morris Island, Smalls had headed straight for the Union Navy fleet, replacing the rebel flags with a white bed sheet which was brought by his wife. The Planter had been seen by the USS Onward, which was about to fire until a crewman spotted the white flag. In the dark, the sheet was difficult to see, but the sunrise arrived which allowed viewing.

The Planter and description of Smalls’ actions were forwarded by Lt. Nickels to his commander, Capt. E.G. Parrott. In addition to its own light guns, Planter carried the four loose artillery pieces from Coles Island and the 200 pounds of ammunition. Most valuable, however, were the captain’s code book. It contained the Confederate signals and a map of the mines and torpedoes in Charleston’s harbor.

Parrott again forwarded the Planter to flag officer Du Pont at Port Royal, describing Smalls as very intelligent. Smalls gave detailed information about Charleston’s defenses to Du Pont, commander of the blockading fleet. Federal officers  learned from Smalls that contrary to their calculations, only a few thousand troops remained to protect the area. The rest having been sent to Tennessee and Virginia.

They also learned that the Coles Island fortifications on Charleston’s southern flank were being abandoned and were without protection. This intelligence allowed Union forces to capture Coles Island and its string of batteries without a fight. The Union would hold the Stono inlet as a base for the remaining three years of the war.

Du Pont was impressed, and wrote the following to the Navy secretary in Washington:

“Robert Smalls Pt. 3: After the Civil War,” to be posted on February 19, continues this series of articles on Robert Smalls.