Search
HomeBlog ActivitiesUndersea Farmers: A Look at Coral and the Ecosystem

Did you know Coral is, in fact, an animal that has evolved to incorporate a garden in its own tissue? 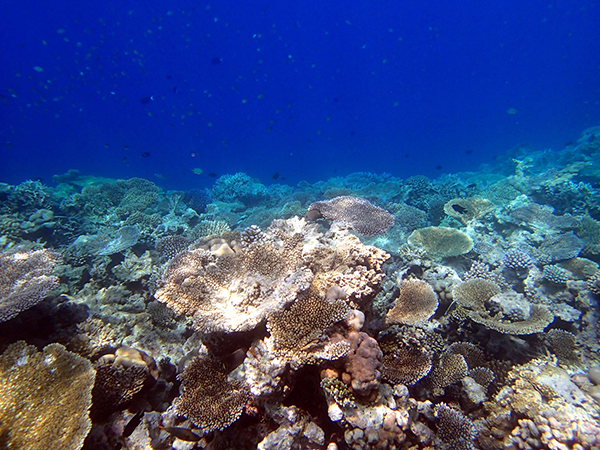 Coral doesn’t eat the plant– it simply protects it, feeds it and benefits from the products of photosynthesis necessary for its survival. Approximately 200 million years of symbiosis have produced a relationship so cohesive, the plant and animal are literally one. They do not start out together, but are so dependent on each other, they cannot survive alone.

Although they look like exotic plants, coral are marine animals that are sessile or stuck in one spot. They cannot make their own food, so they filter microorganisms living in tropical waters for nourishment. Coral discern algae from zooplankton (microscopic animals). They consume the zooplankton, but absorb the algae into their tissue, where it replicates with cell division, creating an internal garden.

To supplement their diet, they have a special “agreement” with their garden.

They have been farming a marine algae called zooxanthellae for over 200 million years that has become such a key part of their existence that it actually lives inside of their tissue. The animal provides carbon dioxide and fertilizes the plant with waste, and the plant receives protection inside the coral. In return, the plant gives the coral products of photosynthesis such as oxygen, glucose and amino acids. The coral uses these products to make proteins, fats and carbohydrates. These nutrients facilitate the production of calcium carbonate, which is its familiar hard coating. The “algae garden” also gives the coral its color.

When a coral bleaches, it indicates the zooxanthella (good algae) has died and been expelled.

The coral is still alive, but will not have the nutrients it needs to survive. It will succumb to the environment, and its white tissue will begin to slough off. When the coral is dead, it will turn dark in color as opportunistic algae engulf its skeleton.

We are all affected by the health of the coral reef. To learn more, search “Chasing Coral” on Netflix and watch this comprehensive documentary.

Side note: If you have been on my tour, you know why the water in the Lowcountry waterway is green. It is the refraction of light reflecting a green wavelength when encountering millions of microorganisms such as larval fish, crab, shrimp, oysters, etc. Our saltmarsh estuary is the most prolific on the Eastern seaboard. Our water is too full of life for sunlight to penetrate. Therefore, plants and hard coral can’t grow on the bottom of the waterway. Tropical waters have significantly less larval concentration (nutrient poor), so they devised a way to produce the extra nutrients that it needs with the incorporation of algae.