Also attracted to the semi-tropical barrier island is an array of wildlife, ranging from loggerhead sea turtles to painted buntings, barracudas to sea horses, alligators, pelicans, dolphins and deer, raccoons, Eastern diamondback rattlesnakes and even the rare coral snake. 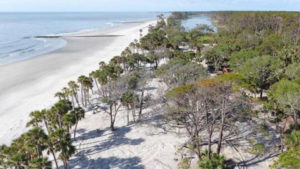 What they all enjoy is five miles of beach, thousands of acres of marsh, tidal creeks and maritime forest, a saltwater lagoon and ocean inlet. Amenities include a fishing pier and some of the state’s most desirable campsites.

Adding to the natural history of the big park is a piece of man-made history: South Carolina’s only publicly accessible historic lighthouse. Dating from the 1870s, the Hunting Island Lighthouse shoots 170 feet into the air, giving those who scale its heights a breathtaking view of the sweeping Lowcountry marshland and the Atlantic Ocean.

— Designation: Hunting Island State Park was developed by the Civilian Conservation Corps (CCC), a New Deal Program created by President Franklin D. Roosevelt. The program was designed to provide employment during the Great Depression while addressing national needs in conservation and recreation.The CCC was instrumental in the development of many of South Carolina’s state parks. A number of buildings built by the CCC in the 1930’s are still in use at this park.The park is listed on the National Register.
— Counties: Beaufort
— Acreage: 5000
— When & How PRT Acquired: Donated in 1938 from Beaufort County
— Pets: Pets are not allowed in the cabins or the cabin areas. Pets are allowed in most other outdoor areas provided they are kept under physical restraint or on a leash not longer than six feet. 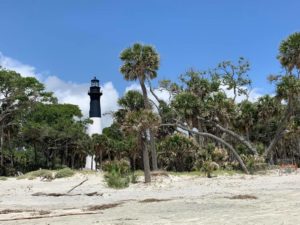 — Tour and Programs Information:
Barrier Island educational programs and tours of the historic lighthouse complex are held March through November. There is a $2/person charge to climb the lighthouse and you must be at least 44″ tall to do so. For additional program information contact the nature center at 843-838-7437.
— Significant Natural Features: Hunting Island is always changing. Migrating creatures in air and sea come and go with the seasons, and the natural forces of erosion constantly re-shape the island.In addition to some 3,000 acres of salt marsh and more than four miles of beach, a large lagoon, created by sand dredging in 1968, has become a natural wonderland and home to such unexpected species as seahorses and barracuda.The park’s upland areas contain one of the state’s best examples of semi-tropical maritime forest, ancient sand dunes now dominated by such vegetation as slash pines, cabbage palmetto (the state tree) and live oak.
— Animal visitors include loggerhead turtles, which nest on the island in the summer months. On dry land and in and around freshwater ponds can be found deer and alligators, raccoons and even eastern diamondback rattlesnakes.
— Hundreds of species of birds also are resident on or visit Hunting Island, including painted buntings, tanagers and orioles, along with pelicans, oystercatchers, skimmers and terns, herons, egrets and wood storks.
— Pay Phone on Site: Yes 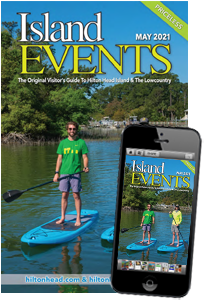