It’s not so wild to see wild turkey. 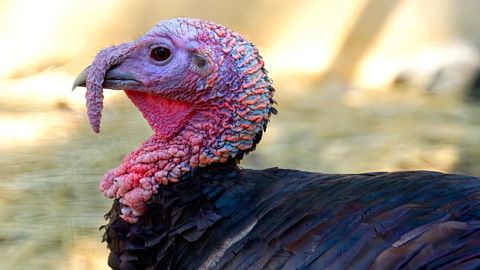 Beaufort and the Lowcountry have many wild turkey living in and loving our area, just like we do! With Thanksgiving just around the corner, we thought we’d give you the low down on these down-producing birds.

The wild turkey (Meleagris gallopavo) is native to North America.

Male turkeys are substantially larger than the female.

Male’s feathers have areas of red, purple, green, copper, bronze, and gold iridescence. The preen gland (uropygial gland) is also larger in male turkeys compared to female ones. Females, called hens, have feathers that are duller overall, in shades of brown and gray. The primary wing feathers have white bars. Turkeys have 5000 to 6000 feathers.

Turkeys have many vocalizations: “gobbles”, “clucks”, “putts”, “purrs”, “yelps”, “cutts”, “whines”, “cackles”, and “kee-kees”. In early spring, males older than a year old (sometimes called gobblers or toms) and, occasionally to a lesser extent, males younger than a year old (sometimes called “jakes”) gobble to announce their presence to females and competing males. The gobble of a wild turkey can be heard up to a mile away. Males also emit a low-pitched “drumming” sound, produced by the movement of air in the air sac in the chest, similar to the booming of a prairie chicken. In addition they produce a sound known as the “spit” which is a sharp expulsion of air from this air sack. Females also gobble like males, but sparingly; they “yelp” to let males know their location. Both adult and immature males often yelp like females.

Males are polygamous, mating with as many hens as they can. Male wild turkeys display for females by puffing out their feathers, spreading out their tails and dragging their wings. This behavior is most commonly referred to as strutting. Their heads and necks are colored brilliantly with red, white, and blue. The color can change with the turkey’s mood, with a solid white head and neck being the most excited.

They use gobbling, drumming/booming and spitting as signs of social dominance, and to attract females. Courtship begins during the months of March and April, which is when turkeys are still flocked together in winter areas.

This thanksgiving, as you sit down to gobble up your holiday meal,  talk turkey with your new-found knowledge of this fowl.